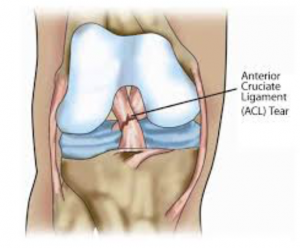 The Anterior Cruciate Ligament (ACL) is one of the major stabilising ligaments in the knee. It is a strong round like structure located in the centre of the knee running from the femur to the tibia.

The anterior cruciate ligament is a major stabiliser of the knee. It prevents the tibia moving forward and rotating abnormally on the femur with any rotational activity.

When it ruptures it does not tend to heal itself. At the time of injury, there is often bruising of the bones and frequently damage to the meniscus or articular cartilage.

Usually this is a significant injury involving a twisting force to the knee. It can also occur after landing from a jump, stopping rapidly, or resulting from direct contact (such as a tackle).

Often patients feel something ‘go’ in their knee or hear a ‘POPPING’ sound. Most people cannot continue with what they were doing (e.g. stop playing sport) and the knee usually, but not always, swells up within hours.

This can typically be made on history and clinical examination. An MRI is usually ordered to check damage to other structures. MRIs vary in their quality and are not always correct.

It may not be absolutely necessary to have this ligament reconstructed. In general, the younger and more active you are, the stronger the recommendation for reconstruction. Surgery is usually recommended if you wish to get back to sports which involve twisting or pivoting. Occasionally, knees can be unstable during daily living activities and, if this is the case, there is a recommendation for surgery. If in doubt, there is no harm in waiting to see how the knee feels after rehabilitation.

Dr Walker also recommends surgery in people with dangerous occupations e.g. policemen, firemen, roof tilers and scaffolders. This is a safety issue to prevent instability in at risk situations.

Repeated instability or abnormal movement in the knee can cause ongoing damage, leading to stretching of other structures around the knee, meniscal tears or arthritis in the long term.

If you do not elect to have surgery, it is strongly advised that you give up sports which involve pivoting.

There is no urgency in performing this operation and in fact it is sometimes better to allow the knee to settle down and regain a near full range of motion prior to surgery.

The operation involves replacing the torn cruciate ligament with a tendon from the same leg; either the hamstring tendons or patella tendons. There is a lot of debate within orthopaedic literature as to which is the best. Dr Walker generally uses the hamstring tendons, unless otherwise indicated. If it is a revision, then the options may be limited and the other sides tendons may be used or even an allograft (someone else’s tendon) or an artificial graft.

At surgery, a tourniquet is applied to your leg to prevent bleeding and it is cleaned and draped in preparation for the operation. 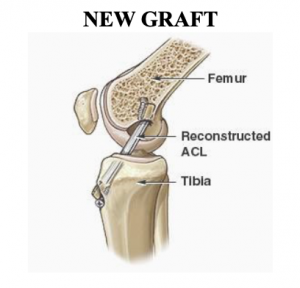 The graft to be used as your new tendon is harvested. This involves taking the hamstring tendons through a small incision just below the knee and fashioning them into a four-stranded graft which takes the place of the cruciate ligament. Tunnels are then drilled in the tibia and femur (the two bones making up the knee joint) and the graft is passed through this tunnel. The graft is then fixed with various devices at each end to stabilise it and allow it to heal to the bone. The fixation devices are numerous and surgeon specific.

This surgery is all done through the arthroscope, using two small incisions, approximately 1cm each. The inside of the knee is thoroughly visualised and any other problems such as meniscal tears treated during the same surgical setting.

The following are guidelines to assist with your recovery until you see Dr Walker post-operatively.

Bandage:
If you stay overnight most of the following has already been done for you.
You will either have a bandage or tubigrip on your knee after surgery. A tubigrip is an elasticated tubular bandage that goes over your foot and around your knee.
If you have a bandage, simply remove it the day after surgery, as well as the soft fluffy white material (velband) underneath to expose the dressings, and put on the tubigrip.

Dressings:
Generally with an ACL there are two arthroscopy portals of approximately 1 cm each, and a longer incision of approximately 5 cm where the hamstrings were removed.
The dressings are covering up the wounds. Generally, they are clear plastic, called opsites. Leave these on unless they are peeling off, which they do sometimes. These seem to stick to some people’s skin better than others. If they are peeling off and you need to replace them, do so as cleanly as possible i.e. use some sort of antiseptic.
Under the dressing there are generally white strips called steri-strips. Try to keep these on. However, again, if they are peeling off you can replace them.
If the wound is actively bleeding, you should see your GP or go back to the hospital to change. This is rare.

Showering:
You may get the dressing wet in the shower. Do not swim or bath until your review with Dr Walker.

Crutches:
Most people will need crutches. You can fully weight-bear unless Dr Walker specifies overwise. The crutches are for your own benefit and are generally used anywhere from 1 day to 2 weeks. The average is about 5 days.

Exercises and Post-op protocol:
You will be shown some simple exercises by the physio before you leave hospital. Generally formal physio starts at 1 week postop. If your physio doesn’t have a protocol please see the exercises below.

Swelling and Ice:
Swelling and some bruising is normal. ICING IS VERY IMPORTANT. Ice roughly 15 minutes every 2 hours until the swelling reduces. Icing varies from a bag of peas to fancy expensive ice machines. Do not ice directly onto the skin as you can get an ice burn. The tubigrip or something of equivalent thickness is good. You will probably have to ice for a week or so.
When sitting place your leg on a stool and when lying place your leg on a pillow.

Pain:
Pain is to be expected. The anaesthetist will give you analgesics and/or anti-inflammatories. Take these as required. Remember with opioid drugs, you cannot drive or operate machinery, so try and wean off these.

Concerns:
If your temperature rises over 38.5 degrees or if you are unwell (i.e. with rigors or shaking) contact Dr Walker or go to an emergency department.
If your wound becomes red please contact Dr Walker.

Follow-up:
Your check-up is usually 7-14 days after the surgery. Generally, this appointment will be emailed to you. If for some reason you don’t hear from us please contact Dr Walker’s rooms.

After your operation (ACL) the following exercises are necessary to assist in your recovery.
Start these exercises the day after surgery. 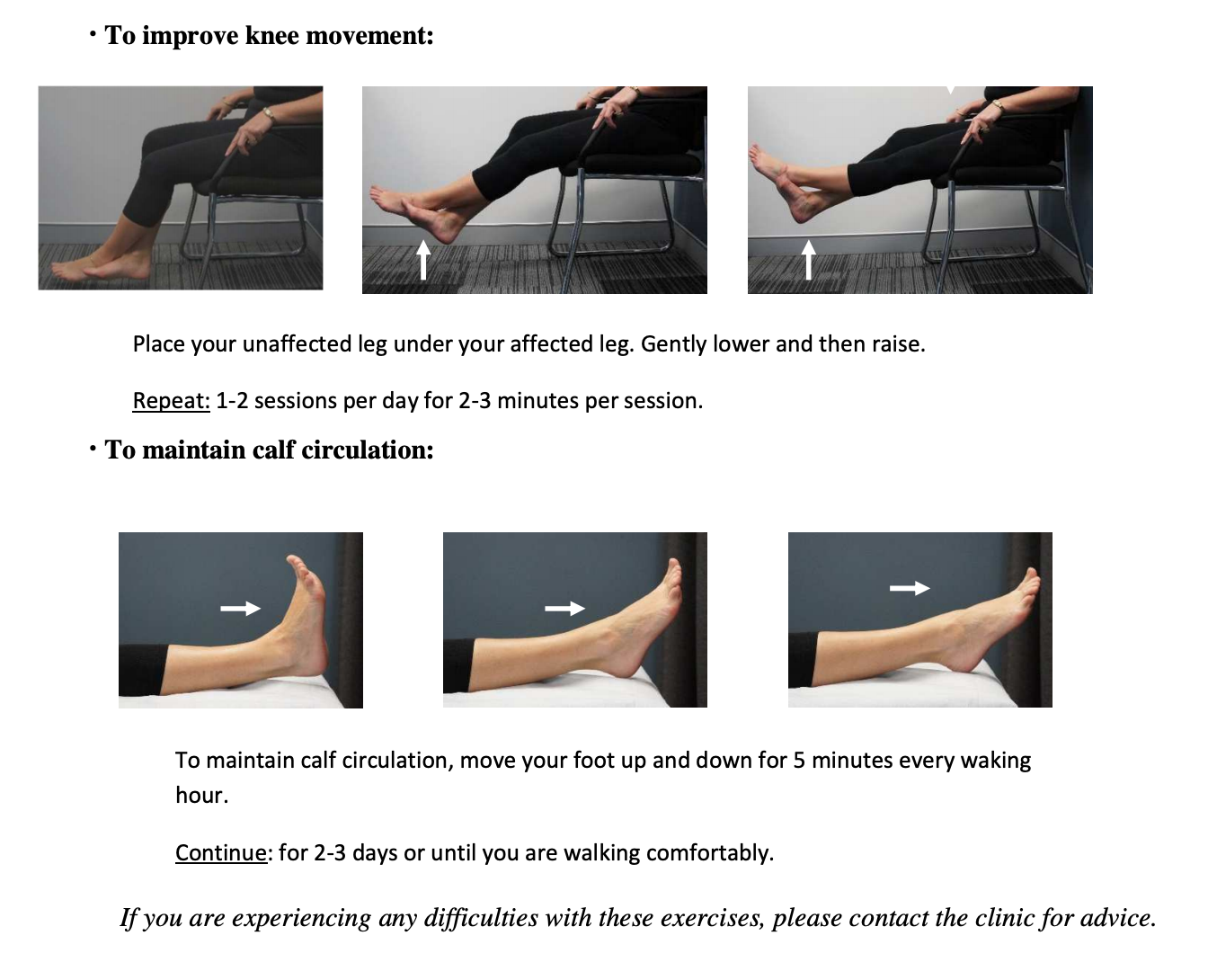 Physiotherapy is an integral part of the treatment and is recommended to start as early as possible. Pre-operative physiotherapy is helpful if your knee is painful or stiff prior to surgery. The early aim is to regain range of motion, reduce swelling and achieve full weight-bearing.

Your rehabilitation will be supervised by a physiotherapist and will involve exercises such as bike riding, swimming, proprioceptive exercises and muscle strengthening.

Cycling can begin at 2 weeks and jogging can generally begin at around 3 months. The graft is strong enough to allow sport at around 9 months however other factors come into play such as confidence, adequate fitness and training.

The rehabilitation and overall success of the procedure can be affected by associated injuries to the knee such as damage to meniscus, articular cartilage or other ligaments.

Complications in arthroscopic ACL reconstruction are not common. Despite advances in surgical technique and the utmost care being taken in surgery, complications can still occur. It is very important for patients undergoing this operation to understand the reasons for the procedure and to have a major role in making an informed choice to proceed with surgery rather than non-operative treatment. Complications may be related to the surgery or may be due to the anaesthetic.

When can I go back to work?
Time off work depends on your work requirements and are very variable. Office workers usually require 1 week off work, whereas manual labourers can require 2 to 3 months.
How long will I need crutches?
The average is about 1 week but with the crutches you can fully weightbear on the leg.
When can I drive?
If it is your left leg, with an automatic car, in3 or 4 days. If it is your right leg, somewhere between 7 and 10 days.
Will I need a brace?
For a routine ACL, no but with some other injuries, a brace may be required.
When can I return to sport?
Generally, 9 months post-surgery.